This year seems to be an eventful year for race cars.

We have covered Camaro-Hot Wheels celebrating its 50th Anniversary with its real ’18 Camaro on sale next year and its limited edition model diecast collectible car release by December this year.

Now, we will cover another eye-catching car not to be missed which is this year’s world’s most powerful and fastest front-wheel drive “hot hatch” ever known – the All-New Honda Civic Type R FK8. It was introduced at the Geneva Auto Show in March 2017, released in US in July 2017, on sale in Japan in September 2017 and launched in Australia in October 2017. On 9th November 2017, Honda Malaysia has officially launched this car and it already has 60 bookings, surpassing its initial target of 30 bookings per month (Full Article can be read here: The Sundaily). So, will this UK-made car catch the attention of many diecast manufacturers to make it as a collectable diecast?

By now, there are a few manufacturers putting the Honda Civic Type R FK8 diecast on sale as listed below:

1. Honda Original Dealer Package Limited Edition (1/43 Scale) Display Model (Championship White). It is sold for 11,880 Japanese Yen (approximately US$104) at Honda Official and US$158 at Ebay. It is already sold off and can be seen briefly here: Storemeister. Ebay has proposed a similar item which is by Ebbro.

Note: The sale price range above is reflected at the time this post is written for the purpose of illustration of range of prices estimated for each model.

As I admire the new power car, I am happy that I have owned the 2016 Honda Civic Type R FK2 Hot Wheels (1/64 Scale) as shown in the above picture. I would be happy to add to my collection with the new 2017 Honda Civic Type R FK8. If Hot Wheels is reading my page, it is my biggest hope that Hot Wheels can get it produced before Christmas 2017 but I doubt so with no news in the air at all at the moment. Nevertheless, even if it comes in 2018, I will still look out for it as it will be a nice additional collectible of a powerful car and mini sized just nice to put it next to my FK2.

If anyone is keen on 2015 Honda Civic Type R, you can find it here:

Verdict of FK8 as a Collectable Diecast

After reading the above post, I wonder what does anyone think of FK8 as a collectable diecast? In my opinion, as a winner of the most powerful and fastest production car in the world for 2017, the 2017 Honda Civic Type R FK8 should have its very own collectable diecast. It would be such a shame if a manufacturer goes pass the production without FK8 in its list especially those who had manufactured 2016 Honda Civic Type R FK2 in the past such as Hot Wheels, Tarmac Works and Tomica.

Anyone who have owned the real car would also not skip a heart beat to miss the opportunity in owning the miniature car model to display at a cosy corner in their house or even inside their real car. For people like me who doesn’t own the real car is also looking out for small models of 1/64 scale like Hot Wheels and Tomica so that I can add on to my current collection. Otherwise, if I am aiming at the bigger scale diecast models, I will have space and storage problems for all the diecast cars in time to come if I am that crazy enough to continue with all sorts of diecast collectibles for many years to come. Just another thought to share and consider…. 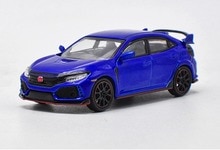